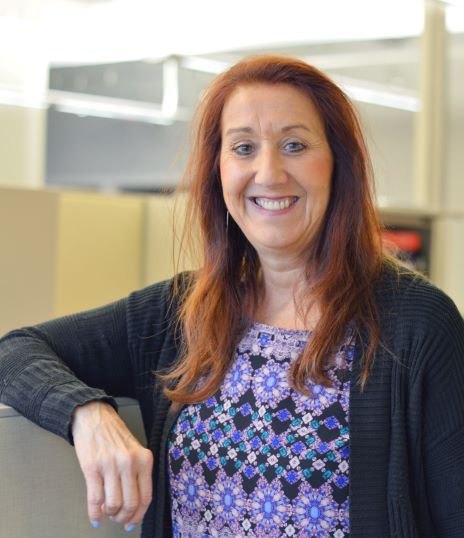 “Writing a good grant, with a succinct story supported by metrics… and emphasizing the importance of fostering a relationship with the grantor, that’s what I want my legacy with GPSEd to be” says Mary Anne Martiny, Director of Community Engagement for GPS Education Partners. Martiny (pictured on the right) spent the majority of her career working in philanthropy, eventually becoming Manager of The Harley-Davidson Foundation. Having spent almost 40 years within Harley- Davidson, some of which time was spent serving as a member of the Wisconsin Philanthropy Network, it begs the question – what brought Mary Anne to the other side of the aisle? How did she transition from giving grants to receiving them? The answer is simple – the power of work-based learning, and its transformative effect on lives, like Mary Anne’s.

Mary Anne was a senior at Hamilton High School when work-based learning opportunities changed the course of her future. “I was taking a class called ‘Office Education,’ and I was not college-bound,” she says. “There was a program where you were allotted four credits for becoming part of a work/study program in your senior year. One of her high school teachers, Mr. Boehme, referred her to Allis Chalmers. “I interviewed with them, and got a job in their engineering department.” During this time, Mary Anne reported directly to the Executive Assistant, a woman who took Mary Anne under her wing, and “taught [her] everything [she] needed to know about formal letter writing.” This initial exposure proved crucial to fostering growth, professionalism, and the hard-skills Mary Anne would need down the line to become Manager of The Harley-Davidson Foundation, and later, Director of Community Engagement with GPSEd.

Although Mary Anne was offered a full-time position with Allis Chalmers after graduating high school, she applied to three specific organizations the summer after her graduation, one of which happened to be Harley-Davidson. “My primary reason for accepting the position at Harley was because it only required me to take three buses to get there, rather than four,” she jokes. This serendipitous choice built upon the foundation work-based learning provided Mary Anne, helping to open doors for her in future positions.

In 2015, Mary Anne retired from Harley-Davidson, and by 2016, she was working with GPSEd. A Wisconsin Philanthropy Network colleague and GPSEd board member, Karen Wilken, referred Mary Anne back to GPSEd to further connect with the local community. Systemizing the process for grantors and donors, Mary Anne devoted her time to building relationships on behalf of GPSEd. She worked hard to collect the many successful statistics coming out of the program, and use those metrics to tell a story. Work-based learning changed Mary Anne’s life, and now, she is giving back, securing funding for today’s students to have a work-based learning experience of their own.

To find out if work-based learning opportunities are right for you, or someone you know, visit gpsed.org/interested-students/#tour to learn more.